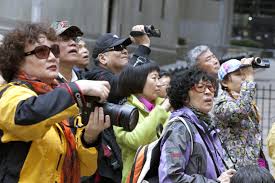 Not only does China have a lot of people, it has a lot of wealthy people.  Indeed, it has been reported that China gets one new billionaire every week!  For that to happen, there likely are many millionaire coming up the ladder behind them.  And one of the things people with piles of money do is visit foreign countries as tourists.

That potentially is good news for neighboring country Kazakhstan.  It has been scrambling to develop its tourism industry to help offset the loss of state revenue which plummeted when the price of oil dropped.

Indeed, Kazakh-tv.kz claimed on September 29, 2016, that one million Chinese tourists are expected in Kazakhstan in 2017.   To me, that seems just as unrealistically high as the further statement that those tourists will do so for the amazingly small amount of US$300 per week, all inclusive.  I suspect that there is a lot of wishful thinking in both statements.

Some in Kazakhstan may not welcome an influx of people from China even if they genuinely do go home after taking in the sights on a short visit.  There has long been some apprehension about in Kazakhstan regarding growing Chinese influence in Kazakhstan – some might say increasing hegemony, at least over segments of the economy.

The Astana Times carried the following relevant and more sober report on Chinese tourism in its issue of November 24, 2016.  Clearly, steps are being taken to reap a harvest of Chinese tourists. (Skip to the last paragraph if you are not interested in all the background.)

A joint national stand represented the regions of Kazakhstan and major tourist companies at the exhibition in China.

They presented the tourist services of Kazakhstan, as well as the potential of participation and cooperation in the framework of the International Exhibition Astana Expo-2017.

The Director of the Department of Tourism Industry at the Ministry for Investment and Development of Kazakhstan, Marat Yigaliev, held meetings with representatives of the State Tourism Administration of China.

“Today there is a serious struggle for Chinese tourists in the world, because every tenth tourist in the world is Chinese,” Yigaliev said.

“In 2015, the number of Chinese who went abroad exceeded 120 million, and the total volume of consumption of Chinese tourists abroad exceeded 200 billion USD… The interest to Kazakhstan is very big.  Tourists from affluent southern Chinese regions have very little knowledge about our country.  Therefore, the Department of Tourism Industry of the Ministry for Investment and Development of Kazakhstan in cooperation with tour operators and businesses headed by NCE RK Atameken presented the tourist potential of the country at the exhibition.  As part of 2017 — The Year of Tourism of Kazakhstan in China, together with other government agencies, we plan to hold a series of activities to promote Kazakhstan in China.”

According to the Embassy of Kazakhstan in China, in 2015, a total of 118,321 Kazakh visas were issued to citizens of China. Of them, 83,358 visas, or more than 70 percent, were issued to ethnic Kazakhs living in China.

That last paragraph is troubling to me when set against the bold prediction that one million Chinese tourists can be expected to arrive in the country in 2017.  Even granting that EXPO-2017 will draw attendees from China, it seems doubtful that 118,321 tourist visas in 2013 (many being for ethnic Kazakhs living in China) will balloon almost 10 fold.

One reason to suspend judgment about an emerging boom in Chinese touristic interest in Kazakhstan was reflected in a converation reported not so long ago between a local tour guide in Astana and a member of a visiting group of Chinese women.  The guide, in innocence, asked the group what they thought of Astana’s many impressive buildings.  The quick retort of one of the visitors was, “Have you ever been to Shanghai?”