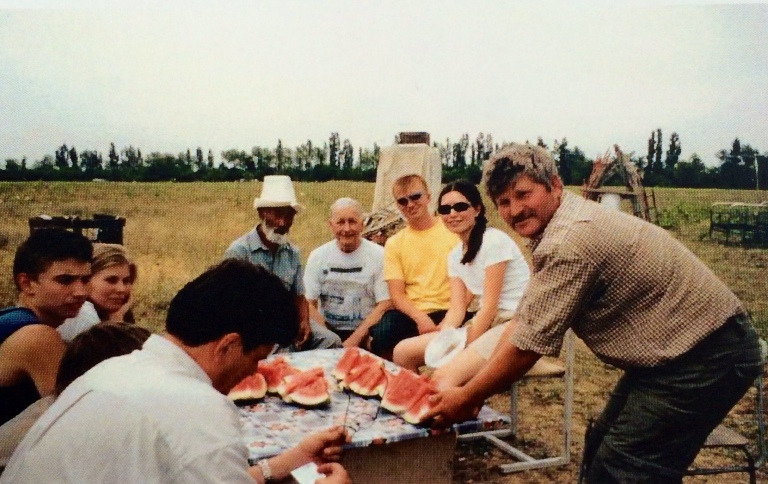 I was saddened to learn of the passing on June 26, 2016, of Bekmukhanbet Nurmukhanbetov, the archaeologist credited with the discovery of the Golden Man (or, equally, the Golden Princess).  He was an affable man and, naturally enough, pleased to bask in the admiration shown by those he met, like me.  He carried the title of Scientific Director of the Saka Mounds Open Air Museum.

On a Sunday, early in August 2000, I took a group of friends and colleagues on an outing to Issyk Lake.  On the outskirts of the town, I noticed a yurt in the field by one of the burial mounds, raising my curiosity.  However, we continued on our way and enjoyed our day in the sunshine, our picnic, and a bit of prohibited swimming.  The hot sun was busy melting the snow in the mountains and by the afternoon the river was quickly rising, threatening our car so we left rather abruptly.

Well, that yurt was now more intriguing than before and, on a whim, I asked our driver to turn in to the field to see what we could discover.  (I have to admit that one of my secret desires is to participate in an archaeological dig!)

Who should we meet but Beken-Ata.  The yurt was a mini-museum, with many artefacts on display.  We took the tour, learning what we could about the burial mounds, the current work, and of course the discovery of the Golden Man.  Beken proudly displayed the photograph of him and President Nazarbayev.  There was also a dish with some money in it, soon supplemented by our own contributions.

We had abandoned Issyk Lake rather quickly and hadn’t had a chance to eat our large watermelon.  Would he like to join us?  Oh, yes, he replied with enthusiasm.  So we moved outside to the picnic table and shared out our chilled watermelon.

I asked the archeologist how it was that he would spend a glorious Sunday at the yurt.  His prompt reply, with a hearty laugh, was that this was his opportunity to get away from his wife!

Retirement is not an easy path for some people.