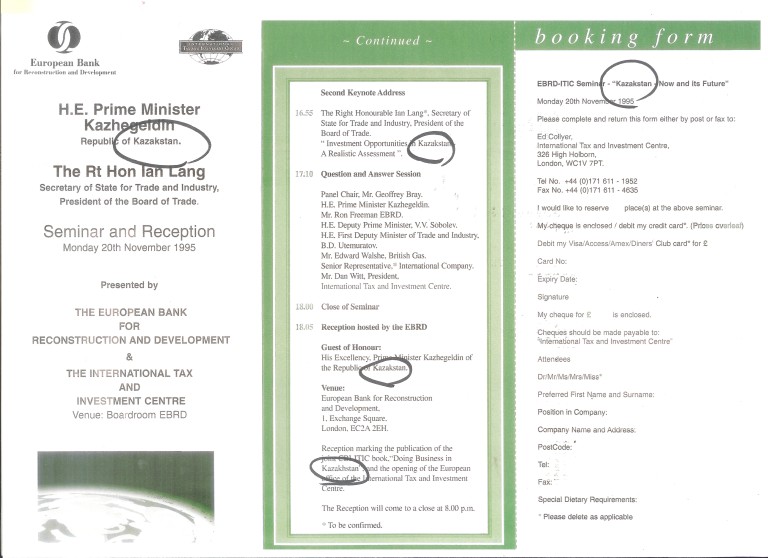 I recently came across a promotional leaflet for a seminar and reception for then Prime Minister Kazhegeldin at the EBRD in London on Monday, November 20, 1995.

My first thought was about the awkward situation that gave rise to the meeting (about which more below) but my second thought was that the name of the country was then still being spelled, in English, as Kazakstan.  No ‘h’.

When, I then wondered, did the change in spelling occur?  I certainly remember shifting from the ‘h-less’ Kazakstan to Kazakhstan.  Indeed, it would be difficult to forget.  We had for years been spelling the country name as Kazakstan and, after the change, my fingers felt very uncomfortable on the keyboard trying to insert the ‘h’.  It was somewhat similar to trying to get the year correct when writing a letter in January or even February.  (Now, a long time later, I have difficulty typing out Kazakstan in the former rendition.)

So, if the name was still Kazakstan in November of 1995, when did the spelling change occur?  And why?

My belief is that the change occurred on June 20, 1997, though I have no document to support that date.  And several attempts at searching on Google has failed to yield an answer.

Why the change?  Again, I am somewhat at a loss to give the reason. I remember someone saying that the country signed its accession to the U.N. Charter in multiple languages, and the English version of the U.N. Charter identified the signatory as Kazakhstan.  I am bothered by that explanation of the change in spelling, however, because Kazakhstan became a member of the United Nations five years earlier, within three months of gaining independence, namely, on March 2, 1992.  Did it take more than five years for someone to notice that all of us were spelling the name incorrectly in English?  I used Google to try to find that signature page and have failed.  (Not a very good day on Google.)

In 1997, linguists argued much about the insertion of ‘h’ in the country’s name, mostly regarding it as intrusion, but the complainers were from out-of-country Russian language purists.

If anyone can provide me with the full story about the change of spelling, please do let me know.

There was another thing that struck me about that brochure for the meetings with PM Kazhegeldin.  The seminar and the reception had been called at very short notice to make use of the Prime Minister’s presence in London.  But why was he in London?  Ah, that is the interesting part.

The EBRD was very miffed at an action taken by the government of Kazakhstan and basically demanded that the Prime Minister make himself available to the head of the EBRD for a serious dressing down.  Kazakhstan had unexpectedly cancelled a tender for a gold mine that had been organized by the EBRD and, instead, had let the mine to a very large Canadian gold mining company, Placer Dome.  This action sent a chill through the international investment community, raising a question about Kazakhstan’s commitment to play by international business rules, and probably raising doubts within EBRD about how it could continue to support business and investment in Kazakhstan.  So that meeting at EBRD became a first step toward improving attractiveness for investors!

We heard nothing about that at the seminar, and all sides seemed cordial at the reception.