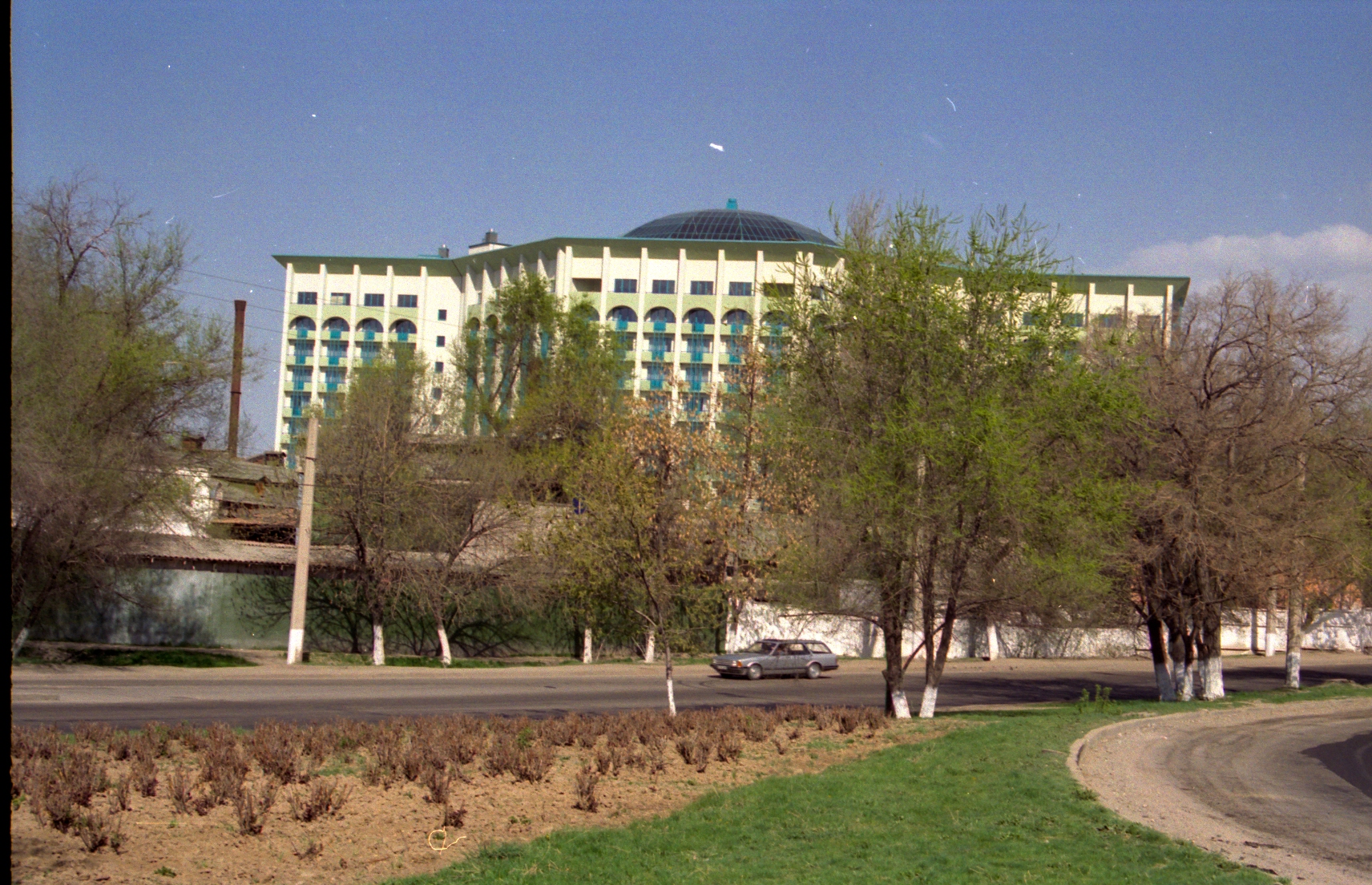 As head of an American law firm in Almaty or maybe simply as a foreigner, I had the good fortune to be invited to lots of receptions, promotional occasions and other important events in Almaty during the 1990s.

For some reason, however, despite my expertise in most things that come under the ‘hospitality’ label, I was not invited to the grand opening of the Marco Polo Hotel (that being the name used by the first management company to operate the hotel).

I had been curious about this new hotel because I worked for many years in several countries on hotel projects with Hyatt International Corporation, Radisson Hotels, and others, and I knew that both Hyatt and Radisson were in expansion mode, particularly in the CIS.  My interest naturally cooled when I learned that the new structure on Satpaev Street was already under a management agreement with the Marco Polo Group from Austria.  They had been aggressive in opening quality hotels in the former Soviet Union, beneficiaries, perhaps, of the temporary advantage Austria had by virtue of its neutrality during the Cold War.

Even if it was already ‘taken’, I was still very interested to see the new hotel.

My calculations led me to think that the opening would be sometime in May of 1995.  I knew when construction started and also that the schedule called for completion in 22 months.  Bingo, May.  But what with the many potential issues that could have arisen in 1995, that might have been an overly optimistic estimation.

So I was surprised to find out that the grand opening, attended by President Nazarbayev as the guest of honor, was held on Thursday, April 27.  As a lawyer, I guess that the construction contract had a penalty clause for late completion.  But I didn’t need to be a lawyer to figure out that booking President Nazarbayev for a function must have taken a great deal of advance planning.  He was and is a busy man.

Well, it turns out that my calculations had not been so far off the mark.  The grand opening was not a real opening at all. It was true that construction was almost completed but the grand opening on April 27 was a stage managed performance.  Workers were kept off the site, any on-going construction was masked from view, and the conspicuous “Marco Polo” sign in front of the hotel was temporary.  In short, it was a mock grand opening though I didn’t know that until later.

I had seen something like this before.  Completion of the Hyatt Regency Hotel in Belgrade had been rushed so as to accommodate delegates to the conference of the non-aligned  states in 1989.  Unfortunately, the conference opened before the kitchen had been installed.  The clever hoteliers solved this problem.  A portable, truck-borne kitchen was hired from the German army for the duration.  The hotel really opened to the public months after the conference ended.

After the grand opening of the Marco Polo Hotel, we had a long weekend in Kazakhstan due to May 1 falling on Monday.  I took the opportunity that day to make an informal call on the hotel to see what I could see.  I thought I would simply walk in, scan the reception area and maybe ask to see one of the guest rooms.  No such thing happened.  On arrival at the gate to the grounds I noticed that the ‘Marco Polo’ sign was not visible – hidden temporarily under heavy paper.

There was no doorman, bellboy, nor anyone at the reception desk.  Contrary to my expectations, there were no guests strolling in the atrium.  I simply walked in.   Soon a person of some authority asked if he could help me.  I replied that I would like to meet the manager.  He replied: “the Front Desk Manager?”  “No,” I said, “the General Manager.”  Takes a bit of nerve to do that but I worked on the assumption that we ‘hotel people’ were all part of one clan and, while I actually was an independent lawyer, I was comfortable with a lot of hotel jargon and knew many important people in the business.

In a short time, Ignatius F. M. Perquin, the General Manager, presented himself.  He was curious about my unannounced arrival but was very gracious.  He showed me around, including some of the non-public parts of the building.  I learned that the first paying guests (two of them) had already arrived even though none of the restaurants were open yet.  However, the place looked very near to complete and I was told that the workmen ought to be able to put the finishing touches on in a few more days.  The restaurants would be running on Thursday, May 4.

The hotel had a great health club but I was unhappy to discover that there would be only two restaurants.  (There was a considerable need for more eating spots in Almaty at the time.)  There is no disco.  There were several conference rooms but no high-ceilinged grand ballroom.  Most of the local staff members reported for work not later than April 10 and had subsequently been undergoing training.

A sub-sub basement was a veritble warehouse of spare parts and extras.  The assumption had been that nothing could be locally sourced in the event anything in the hotel wore out or was broken, doors and furniture included.

I didn’t view the casino.  It was to be in another building on the property,  a low-rise or underground structure (casinos don’t need windows), but was not yet finished.  No operator had been found for it.  The owners were talking to some Turkish casino operators but it looked like the casino would be on ice for the time being.

The construction of the hotel posed major logistical problems for the contractor.  I don’t know if they seriously considered the sourcing of some materials in the Almaty area or not.  What they did was gather together in the West everything – everything – necessary to build the hotel.  ‘Everythng’ included doors, hinges, carpets, the kitchens, the marble, the I-beams, the cement, roofing material, futniture, bedding materials, wallpaper, and the complete inventory for what a hotel needs to exist and operate.

The ‘disassembled’ hotel was then transported to Almaty by train.  The train had more than 50 cars, each bearing two containers.  For security, the containers were welded shut. Because Russia in 1993 was viewed as dangerous territory, the two containers on each train car were loaded door-end to door-end.  Not content with that security, the freight people then had the two containers welded together.  Intending bandits would then have to pry apart and move one of the containers just to gain access to the welded doors.  When finally assembled, the train set off with armed guards on board.  In some parts of Russia, a small airplane flew overhead scouting the route and hoping to ward off any lurking danger.

When it came time to depart, I shook hands with Mr. Perquin near his office at the rear of the atrium and started my walk to the front door.

On my way, two young women dressed in nice uniforms called to me from the café near the Yurt Bar.  They assumed I was a consultant – they apparently had been there in abundance – and invited me to have a tea or coffee – no charge.  They were practicing in preparation for real customers.  They gave super service to  me, their first customer.  As it was a national holiday, I was in no rush to leave.  We engaged in conversation while I sipped my coffee.  When I was ready once again to depart they asked if I would like to join them for lunch.  I assumed this was to be at their café but, no, they led the way to the very nice underground staff cafeteria where we queued up for our meals.

The ladies led me to a table where we put down our trays and took our seats. I felt a bit embarrassed when Mr. Perquin entered the room and spotted me, a clear interloper at this point.  But, professional host that he is, he said nothing.

After lunch, I felt obliged to really exit the hotel.

Photo:  The photo above shows the hotel nearing completion shortly before the grand opening.  The ‘Rahat Palace Hotel’ sign has not yet been installed, and the concrete perimeter fence is still in place. That chimney to the left of the building was for a very large bakery that was displaced to make way for the office tower now on the site.

Consultancy:  Although I currently am trying to ensure that my book gets maximum exposure, the fact is that writing and publishing are sidelines for me.  My main focus is assisting foreign companies to engage in business in Kazakhstan (or elsewhere in Central Asia) and assisting businesses and individuals in Kazakhstan with their projects outside of Kazakhstan.

Based on my long career as a lawyer and my time spent in Kazakhstan, I take on projects in a wide range of industries, certainly in oil & gas, banking & finance, and minerals.  But such a statement insufficiently acknowledges the many spheres in which I have had experience – commercial trading, manufacturing in several areas, transport, directorships of companies listed on the London Stock Excange, shipping, and many more.