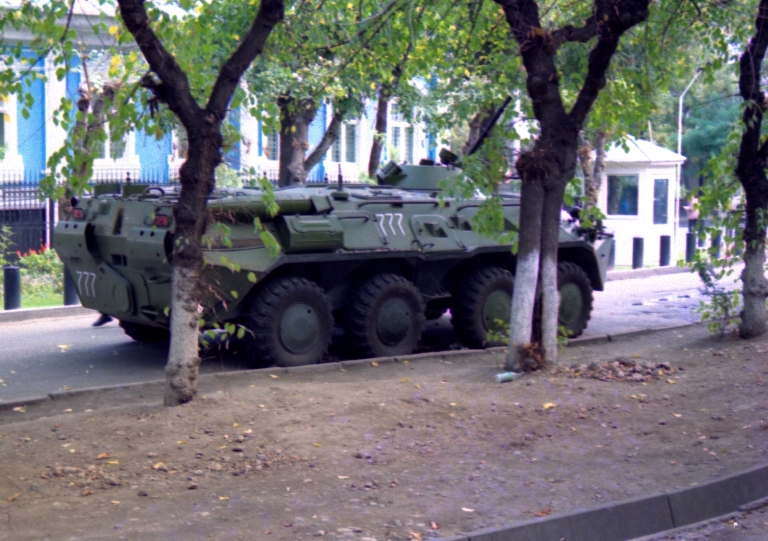 In Almaty, then the capital of Kazakhstan, the trailblazers discovered that they had few choices for a site.  Almost certainly they were looking for a self-contained structure offering as much security as possible.  What they came up with was the building at 99 Furmanov Street:  self-contained, high fence with gate, with outbuildings and some parking space within the fenced area.

What it didn’t have was high security.  The building was only slightly set back from the street, the curb could not be heavily fortified, and the standard glass windows on the street-side working offices must have worried security personnel fearful of injury to staff from projectiles, bombs, or bullets.

I didn’t often go to the U.S. Embassy but I had reason to go there shortly after the events of September 11, 2001 in the United States.  I shouldn’t have been – but was – surprised by the fact that armed soldiers from Kazakhstan’s army had been posted outside the Embassy and an armoured vehicle was parked on the side street.  How good it was to see them.  The soldiers were serious about their business.  I won’t say they were intimidating, but they certainly looked like they were ready for action.  My guess was that they were an elite, ready-for-anything outfit.

The next day I went out of my way to take another look at the Embassy.  This time I brought along my small, fixed lens 35mm camera.  No smartphones in those day.  I had hoped to snap some of the men.  That wasn’t to be.  Those no-nonsense guys definitely didn’t want their pictures taken.  Nevertheless, as a souvenir of the day, I did manage to snap the armored vehicle on the side street with the Embassy in the background.

In the photo, Furmanov Street is out of view, off to the right.  Immediately to the right of the armored vehicle is the Embassy’s sidedoor security hut.  You can see the chap theer getting ready to present his credentials.  He likely is about to have his lunch in the Embassy’s cafeteria.

It was not my business to learn the background of this episode of protecting the Embassy. I can’t say if the Embassy requested protection or the government ordered it after sensing the potential risk after 9/11 in America  In either case, those soldiers were doing a great job.

Find more stories about Kazakhstan from the 1990s and later in my book, West Meets East in Kazakhstan.  It’s available in softcover or e-book format from AuthorHouse (the publisher), or Amazon or Barnes & Noble.