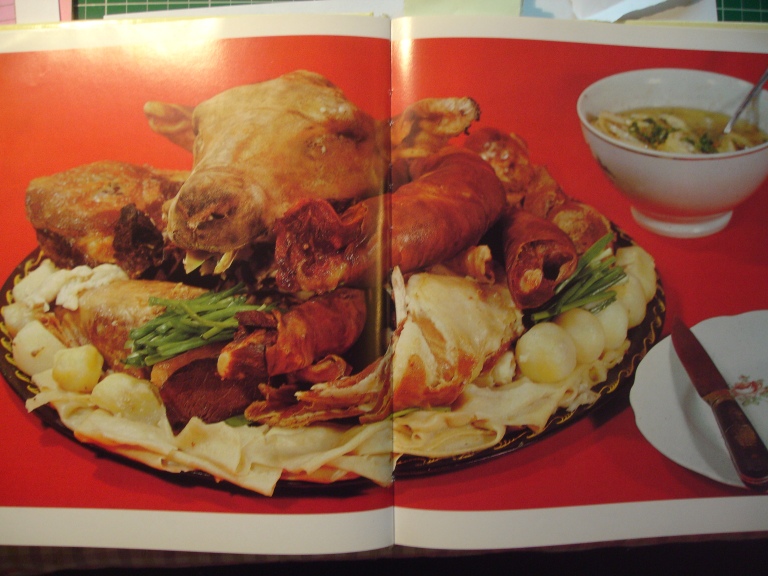 Lamb in the Kazakh Manner/ The National Cooking of Kazakhs (1990)

As one of the main holiday seasons approaches, it is timely to take a closer look at hospitality in Kazakhstan.  And I will start by quoting myself:

Strangers must be welcomed, and welcoming means providing food, meaning much food.  It also often means providing meat – lots of meat.  I have been the beneficiary of much hospitality by Kazakh families.  That is to say, I have eaten much.  Sometimes so much food is presented that you begin to worry if the family is mortgaging its eating future in order to provide the present meal.

Practically all the people I have met in Kazakhstan have been openly welcoming to me, a foreign stranger.  My book recounts several instances of this, such as the gardener who not only showed me the way to my destination but also practiced his surprisingly good English with me.  Then there was the Karaganda man and his wife who, having initially driven past on a mountain road leading to Almaty, stopped his car, reversed it and not only took me to Almaty but delivered me to my apartment building without any charge.  He was happy simply to speak English for half an hour.  There are many, many other examples, only a few of which are mentioned in my book.

Hospitality and generosity take many forms but local hospitality in Kazakhstan really excels at the dinner table.  In the immediately photo below, we are just starting to take our seats, with the main dishes yet to arrive at the table. 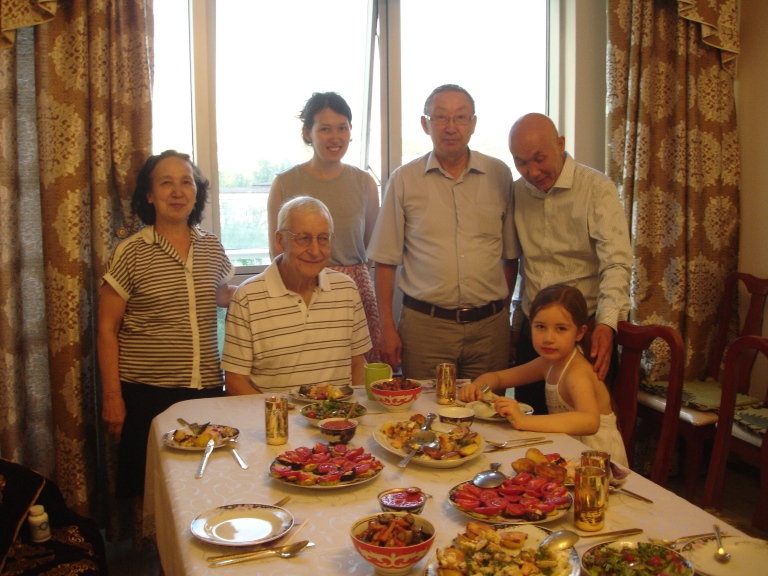 My first occasion of being lavishly feted was when a prominent local lawyer, Nurlan Janabilov, invited me to join him and his family for dinner in their apartment in the autumn of 1993.  The apartment was in the usual Soviet style, meaning that space was at a premium.  Nevertheless, the entire family was present to meet me, the honoured guest, and so was the lawyer’s brother, Nurlan’s driver and one or two other members of his office staff.  As is customary, the sofa was pressed into service for seating on one side of the table, and the room was just wide enough to accommodate chairs on the other side.  In such cosy, if tight, circumstances, it was easy to begin to feel at home.

Clearly they were interested in meeting and getting to know a foreigner, and they wanted to feed me well. This was 22 years ago and, while the evening was memorable, I can’t recall the full menu that was served.  The highlight, however, was horse meat which, on this occasion, came soft and falling off large bones.  We ate most of the food with our hands, piling the cleanly picked bones in the middle of the table. While the meat was being eaten, nothing else was served, none of the potatoes and cooked vegetables that might have accompanied the main dish in the West.  We had already eaten plenty of salads with lots of vegetables so the meal certainly was well rounded.

After the meal we went out for a stroll and ended up at the local indoor swimming pool where the men all took a late night dip in underwear before going back to the apartment to top up with some more food and libations.  The pool had not been reserved for our use but it fortunately was nearly empty of people.

I kept in touch with the host for several years but mainly lost contact after President Nazarbayev appointed him to the Senate of Kazakhstan, whereupon he moved his family to Astana.

Not long after that memorable occasion, one of the local lawyers in our office invited me to join his family for dinner.  This was near the end of the year, and the lavishly decorated New Year tree was ready to help the family celebrate the close of 1993 and the start of 1994.  There were at least six of us at the table, and I remember the woman of the household going back to the kitchen on numerous occasions to top up a platter or two, or to bring in more bread, and finally to serve the dessert.  It was a lovely meal made all the more enjoyable by the pleasant and wide-ranging conversation.

What a surprise it was in the summer of 2013 – almost exactly 20 years later! – to be invited back to the same family in the same apartment for another repast, this time with my wife and daughter.  The entire family had reassembled for the occasion, the father having returned from work in Astana deliberately to attend the meal.  He complimented me for looking not at all changed from 20 years before, and I had the pleasure of returning the compliment to him – he did indeed look virtually unchanged from when we first met.

Three courses were served along with a large selection of salads. Knowing that I am intolerant of gluten, the lady of the house did not cook the beshbarmak that otherwise might have been featured.  Instead, we had duck followed by fish and then another main but now forgotten dish.

Here is a typical table of starters ready for the beginning of a major repast in my apartment in Almaty!  Once again, a sofa has been pressed into service. 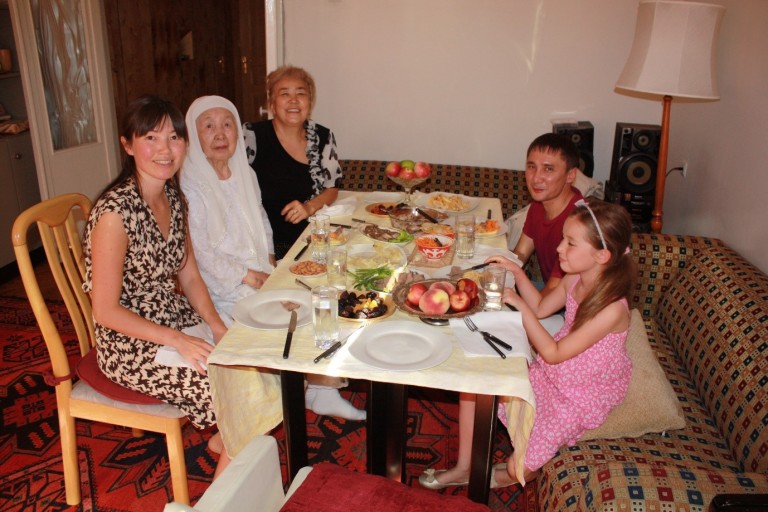 This post is about the foods of ethnic Kazakhs, but be sure that these dishes are also widely eaten by the rest of the very diverse population even if only on festive occasions at restaurants or receptions.  Russian-style dishes are widely eaten, and not just in the households of ethnic Russians.  Also, foods from many of the member states of the former Soviet Union found their way to Kazakhstan and are enjoyed by a wide cross section of the population. 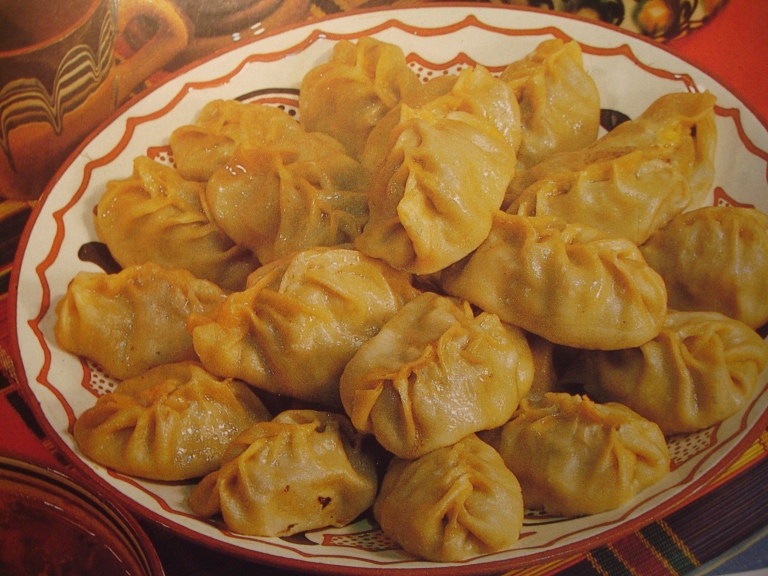 Manty with meat and pumpkin/ The National Cooking of Kazakhs (1990) 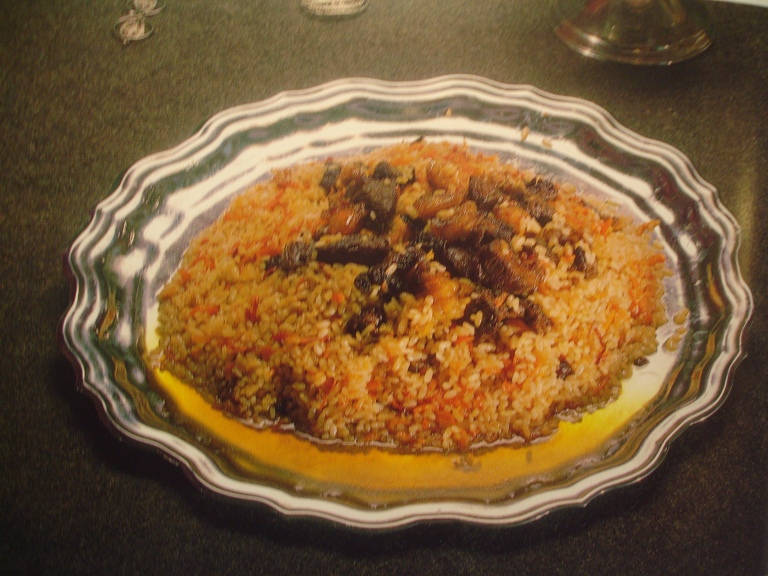 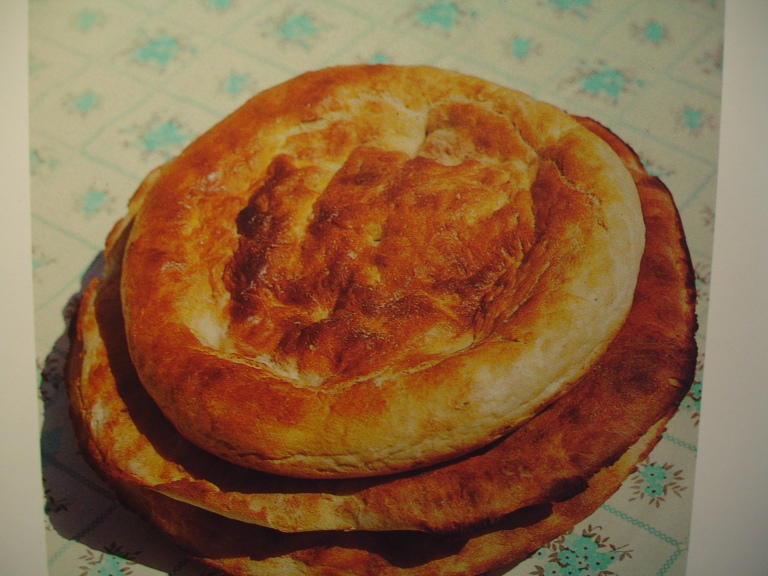 Baursaks/ The National Cooking of Kazakhs (1990)

Purchase your copy of West Meets East in Kazakhstan through the Publisher, Amazon or Barnes & Noble at: