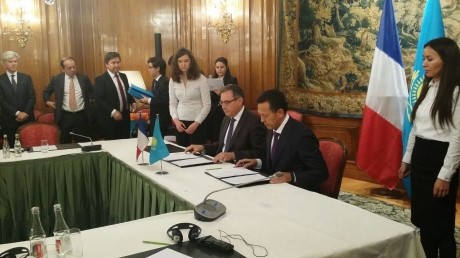 This may be a “Warren Buffet Moment” for Kazakhstan – you know, “the lower things go, the more I buy”.

If so, foreign investors ought to take a fresh look at business opportunities in Kazakhstan.  Why might this be a good idea?  The big picture is that Kazakhstan, long term, offers a good place to do business in the heart of the Eurasian land mass, and entry now when the economy is down might be far better than waiting for the economy to rise.

Yes, there has been much news about Kazakhstan suffering a crisis from external shocks.  Several things have coincided to produce a perfect economic storm for the country: the fall in the price of crude oil which adversely affects government revenue in a big way; the fact that Kazakhstan’s main trading partner, Russia, is reeling from sanctions-induced spending cuts and an economy in recession; and the fact that Kazakhstan’s other main trading partner, China, has a faltering economy and has reduced its import of oil, minerals and metals.  Russia in particular seems to be in dire circumstances.  USA Today recently reported that Russian Finance Minister Anton Siluanov had said that there was a danger that the country’s vast Reserve Fund could be entirely exhausted in 2016 if oil prices stay at their current level.

The local consequences of these shocks were staved off to an extent by using National Bank reserves to support Kazakhstan’s national currency, the tenge.  However, when both Russia and China devalued their currencies, it seemed futile to keep burning the country’s reserves, and so the tenge was floated near the end of August.  It immediately lost 26% of its value and has floated lower in subsequent weeks.

In light of this, it may be hard for some to sustain an optimistic outlook about investing in “the economic engine of Central Asia.”

On the other hand, some people think this is opportunity time.  Look at some of the macroeconomic attractions:

For more information about the attractieness of Kazakhstan and the opportunities now presented, read this article in the UK’s Independent newspaper, published on November 9, 2015, by Vladislav Inozemtsev and entitled “Why Kazakhstan holds the keys to the global economy.”

Kazakhstan itself sees the present as a good time to invest.  Led by President Nazarbayev, the government has been active in trying to build a new surge in industrial investment.  He took a delegation to the United Kingdom and France last week, landing several contracts or promises of investment, and helping to firm up relations with key industrial leaders in both countries.

In London, according to The Astana Times, business people accompanying the official delegation signed agreements and memos worth $5 billion across industries such as energy, pharmaceuticals, aviation and financial consulting.  In addition, the President met with the leaders of Shell, Rio Tinto, Kikma Pharmaceuticals, Aracelor Mital and J. Rothschild Capital Management, no doubt seeking to drum up investment.

An important memorandum of understanding was also signed between TheCityUK (an independent membership body promoting the UK’s financial services industry and professional services industry within the United Kingdom and abroad), the National Bank of Kazakhstan and the European Bank for Reconstruction and Development.   The MoU sets out the ways in which the parties will work to assist Kazakhstan’s intentions to develop Astana as an international financial center.

After London, President Nazarbayev’s had a two-day official visit to France.  Again, he was accompanied by business leaders from Kazakhstan.  A number of deals were agreed in Paris, according to AKIpress.  A shareholders agreement was signed by KazMunaiGas and Air Liquide to set up a joint venture to manufacture industrial gases in Kazakhstan.  The three oil refineries in Kazakhstan (Atyrau, Pavlodar and Shymkent) will outsource their gas production while new technical facilities using French technology will be built to produce industrial gases.

Another agreement was made between France’s National Space Center and the Kazcosmos Space Center.  And France agreed to participate in Expo-2017 in Astana.

There are indeed business opportunities in Kazakhstan, and newcomers will be welcomed.

Learn more about Kazakhstan by reading my book – West Meets East in Kazakhstan.  This consists mainly of articles I wrote for The Almaty Herald newspaper in the 1990s and later years.  The book is about my perceptions as an American expatriate of life in and around Almaty in the 1990s. The book is available in soft cover or as an E-book through publisher AuthorHouse, and the websites of Amazon  and Barnes & Noble.  In some countries, the book may not be available through Amazon or Barnes & Noble if they do not store copies in their overseas warehouses.